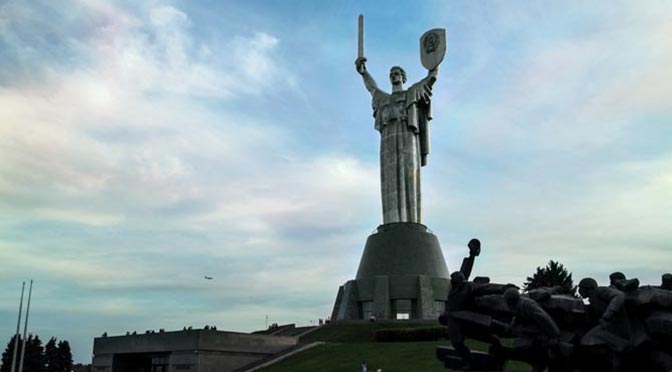 After an excursion to the Museum of Folk Architecture and Life in Pyrohiv in September 2017, I visited another landmark – “The Motherland Monument” in Kiev. I was exhausted after a long day of exploring the open-air museum on foot, so I just wanted to admire the scenery of the city without any additional movements.

Is it worth to lift up to observation platform “Landscape” (36.6 m) of the Motherland Monument in Kiev?

About how I was getting to the sculpture “Motherland – Mother” …

As I wrote in the previous article, from Pyrohiv I got to Lybidska Metro Station by bus… And then it would be better if I went by another bus or by metro as close as possible to the monument. But it seemed to me that the distance from the Lybidska Metro Station to The Motherland Monument is not large, and I went on foot. That was my mistake!

My legs hurt heavily after a few kilometer walk along the Holosiivskyi National Park and the open-air museum in Pirogovo. I had been going to the monumental statue no less than 1.5 hours, even though Google’s navigator promised that I’ll be reaching on foot in 55 minutes.

Map of my walking route:

After all, it was seeming that it was so close… Metal woman with a sword and a shield was beckoning me to itself…

And when I had already reached the foot of the mountain on which the monument stood, I found with horror … stairs up. It was much easier for me to climb to the observation deck in the south tower of St. Stephen’s Cathedral (136 meters high, 343 steps), when I was in Vienna several years ago. But, nevertheless, I did it 🙂 – I climbed to the foot of The Motherland Monument and, accordingly, to the National Museum of the History of Ukraine in the Second World War.

On the square in front of the Motherland Monument…

There were a fountain and sculptures depicting the events of the Second World War, as well as several exhibits of large military equipment, around which tourists and children gathered in the square in front of the statue.

On both sides of the entrance into the pedestal of the sculpture “Motherland-Mother” on the wall in a large font an inscription in Ukrainian and English was engraved: “National Museum of the History of Ukraine in the Second World War. Memorial Complex”.

Also on the door was a list of services provided on the territory of the complex:

How much does it cost to go up to the observation deck “Motherland Monument” in Kiev?

I was interested in the observation deck. I haven’t dared to climb to 91 m high. In addition, the price was 4 times higher than the rise to a height of 36.6 m. Than the cost of lifting to a height of 91 m was 200 UAH. So I decided that for my impressions is enough 37 m, paid 50 UAH and walked to the lift on the third floor.

Inside the sculpture “Motherland” in Kiev…

Rising to the third floor to the Hall of Glory, I have just gasped! It was a majestic round hall with white marble walls and panoramic windows. On the walls were engraved and gilded the names of the heroes of the Second World War, and an enlarged copy of the star of the Order of Victory, surrounded by a panel with illustrations of military events, hung under a white ceiling vault.

I’ve never been interested in interiors. Temples… Museums… Usually I never even go inside – it’s not interesting for me, because the interior decoration does not cause any emotion at all. I like only architecture and facade design. But here I was just ecstatic! The hall was absolutely empty, but something magical was flying in the air. Something … what causes euphoria!

In the hall there was one female employee of the memorial who was in charge of the lift. She lifts up several people by an elevator to steps. There raised tourists are met by another woman who leads them to the observation deck and watches the order on the viewing platform.

The elevator had lifted us to the staircase in the completely enclosed room without windows. And we had climbed up this terrible stairs to the viewing platform.

The viewing platform resembled a balcony a meter and a half wide at the foot of the sculpture “Motherland” and was fenced with a protective grid so that tourists can not fall out of it. In this mesh “wall” there were a few holes – windows, and on the balcony there was a pair of military binoculars with a 30-fold optical zoom.

On the balcony were allowed no more than 10 tourists at a time. After all, it would be crowded for more people. Each tourist could admire the landscapes of Kiev for 10-15 minutes.

I have climbed on the platform. The wind was noising. Panoramas of Kiev were, of course, beautiful... How can the center of Kiev not be beautiful? But being on the observation deck has not caused me delight or other strong emotions. The Hall of Glory left much more impressions!

But anyway, at least once to see Kiev from a bird’s eye view is necessary! Therefore, I do not regret at all that I have lifted up. At least once in ones life it is necessary to climb up on top of the high woman with a sword in the center of the Ukrainian capital, given the fact that it is one of the highest statues in the world.

At the observation platform “Motherland Monument” 36.6 m in Kiev:

It can be interesting My personal travel journal. My photos of attractions and landmarks. Impressions from trips

Popular on the site